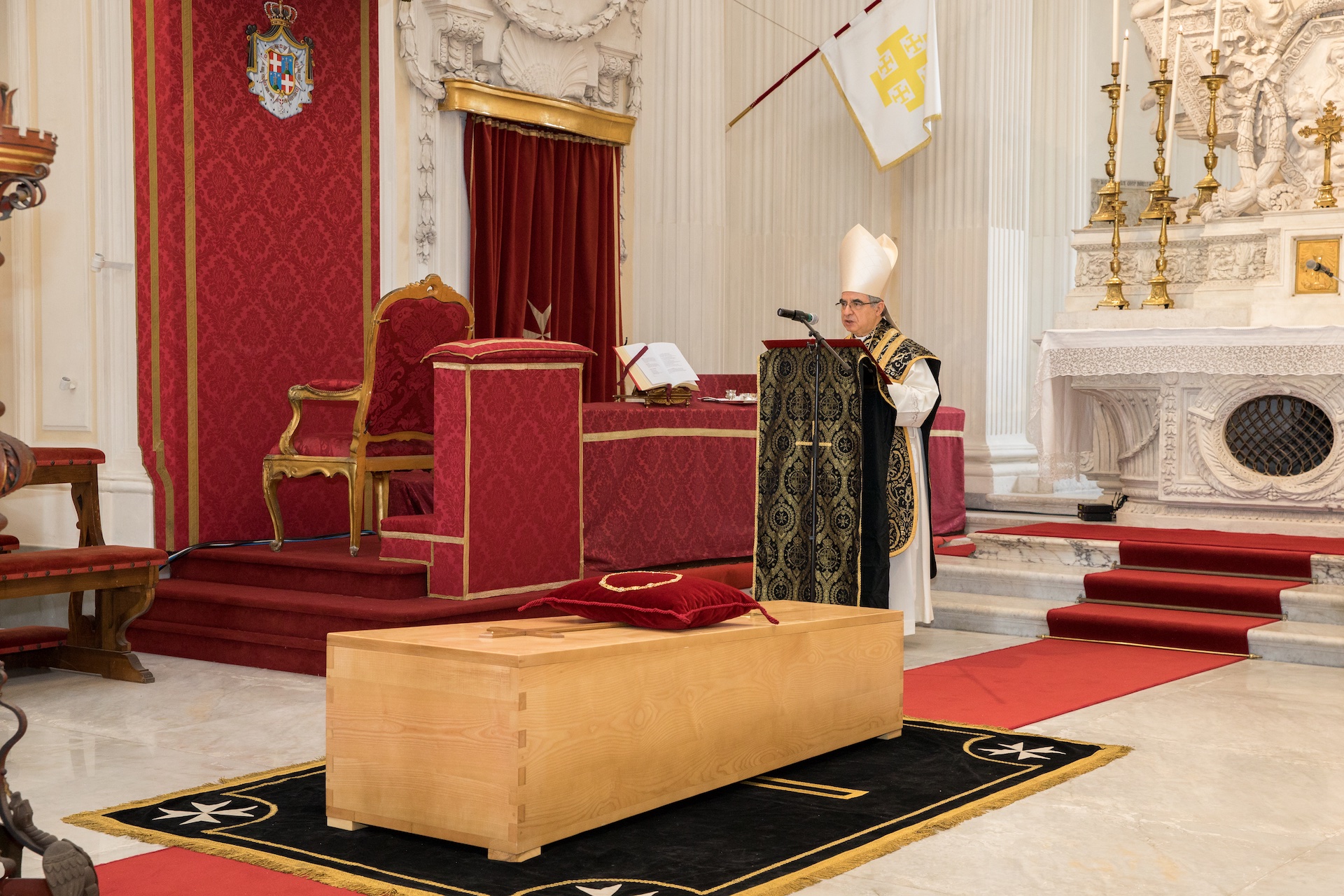 We are gathered here around the altar of the Lord to celebrate the funeral of His Most Eminent Highness Fra’ Giacomo Dalla Torre del Tempio di Sanguinetto, Grand Master of the Sovereign Order of Malta. The restrictions caused by the health emergency unfortunately mean that only a few people can be present. However, numerous members of the Order are following the celebration through the social networking services, in this way expressing prayerful gratitude and sincere affection for the illustrious dear departed.

This contrast between emptiness-fullness, paucity-multitude symbolizes on one side the humility with which Fra’ Giacomo lived and worked, and on the other the silent and fruitful work of the members and thousands of volunteers of the Order he led with wisdom and spirit of service. These are generously and tirelessly helping the sick and the poor, sorely tried during this pandemic, continuing the solidarity so typical of the Order and expressing the creativity in charity of which the faithful disciples of the Gospel are capable.

Before the coffin of one who the Holy Father, in his message of condolence, called “a zealous man of culture and faith”, we are reminded of the fragility of earthly life: a life that ends like a burnt-out candle. The faith that the Lord has given us sends a strong, decisive and liberating call. It is the call to life that does not know death: the eternal life, the life itself of God that, in Jesus crucified and resurrected, is lived by the just and good man. Thus, the grief for the death of a loved one is opened by our faith to hope, or rather to spiritual joy. This eternal life is the destination that the Lord, in His love, wanted and wants for all and every one of us. And we will reach it if we have honoured our Christian vocation, living our baptism consistently.

Today we want to thank the Lord for the gift He has given to the Church and to the Order of Malta, through the work, the apostolate, the testimony and the person of Fra’ Giacomo. Let us also express our gratitude by recalling some features of the life and person of Fra’ Giacomo in the light of the Word of God, proclaimed in this liturgy. The passage from Luke spoke to us of the preparation for the Passover of Jesus that he spent with his disciples during the last supper. It is the Passover in which Jesus gave them bread and wine, but which he gave them in an unprecedented and surprising manner: in the bread and in the wine, he offered his body and his blood, sign of the total gift of himself on the cross. This is the logic of Jesus; it is that of donation “I am among you as one who serves” (Lk 22:27).
These seem fitting words for Fra’ Giacomo Dalla Torre, whose life was marked by giving himself and by service. I like to remember the empathy of his cordial and sincere conduct in human relations; his meekness and acceptance; the deep faith animating all his actions; the love for the Pope and Church breathed since an early age in his family, always linked to the Holy See. This ecclesial sensitivity, combined with a great sense of duty, enabled him to perform his professional tasks with scrupulous fidelity, as well as the positions he progressively held within the Order, up to the highest position. He was always prepared to place the common good before other interests or aspirations; he made an effort to work with rectitude and generosity, thus earning respect and common appreciation.

Fra’ Giacomo served culture and, through it, he served the Word of God. Graduating in Literature and Philosophy at the Rome University, he specialised in Christian Archaeology and Art History. For him, art and Christian archaeology represented the face of the Church, its artistic and artisanal fecundity, its vocation to communicate a message that is Good News. Under this aspect he lived his profession as a mission: he devoted himself to studying and disseminating mediaeval art and for many years he held academic posts in the Pontifical Urbaniana University, teaching classical Greek, and was also chief librarian and archivist for its important collections.

Most of his working activities were combined with his duties in the Order of Malta, which he entered in 1985, taking solemn vows in 1993. From 1994 to 1999 he was Grand Prior of Lombardy and Venice and from 1999 to 2004 a member of the Sovereign Council. He was elected Grand Commander by the Chapter General of 2004 and on the death of the 78th Grand Master Fra’ Andrew Bertie he became Lieutenant ad interim. From 2008 to 2017 Fra’ Giacomo Dalla Torre held the position of Grand Prior of Rome. The Council Complete of State of 29 April 2017 elected him Lieutenant of the Grand Master and on 2 May 2018 he was elected 80th Grand Master of the Sovereign Order of Malta.

It was during this period that I got to know him and to establish a good cooperation relationship. This was easy to do with him: he was simple, good and generous. In the fulfilment of his vocation as a consecrated person he always strived to follow more resolutely the Word of God, accepting it in faith and making it become “life of his own life”. And so, his apostolate, his work – in a word his whole life – was directed at a personal, intimate communion with the Lord Jesus, from whom he found strength and light for his journey. His shining Christian witness is an example for the professed of the Order, just as it is for the other members, the knights and dames all over the world. All are called to consider that the effectiveness of their service in the Order, as any apostolate in the church, comes first of all from the prayerful union with God and from His Grace that supports us even during times of trial, weariness and difficulty.

The guiding principles of the Order of Malta – defence of the faith and service to the poor and the sick – materialise in an evangelical commitment to solidarity, to justice and to peace. But to accomplish this not always easy but important mission, it is first necessary to maintain an intimate friendship, a constant communion, with Jesus, unceasingly contemplating his face in prayer, so as to serve Him with all the energy of the brothers. With this interior disposition, the Order of Malta will be able to respond effectively to the new social emergencies, to the moral and material needs of all those who are suffering and in distress. Not only, it will also be able to face with wisdom and a spirit of sharing the greatest challenge of all: the reform of its Constitution, for which Fra’ Giacomo strove to lead it along the path of absolute fidelity to its founding charisma.

Fra’ Giacomo Dalla Torre served the Church by ardently serving the poor and the least. He always venerated and loved the Church. Without passionate love for the Church everything seemed incomprehensible to him. Today, looking at this brother of ours, we realize how much the love of God captivated him and how much his passion for the Church was a priority. He unceasingly lived his vocation as a Christian and as a consecrated person who “came to serve and not to be served”. His example and his witness are an invitation to us to unreservedly announce the primacy of God. He reminds us that the presupposition of every apostolic commitment and antidote of every dangerous inner and outer division is personal sanctity, quietly listening to the Spirit that frees and transforms the heart.

He has now passed into eternal life. And just as Jesus, the risen, entered the Last Supper through closed doors, so he penetrated the spiritual place that is the heart of Fra’ Giacomo Dalla Torre: an open heart, wide open all his life to the meeting with the Lord. To one who is now close to the Lord we entrust our prayer that each of us arrives at our appointment with death with our hearts purified and hands full of fruits of the love bestowed throughout our life.
Now, in this Eucharist, let us pray that our brother be purified from any trace of human misery and share the blessed legacy of the friends of the Lord.