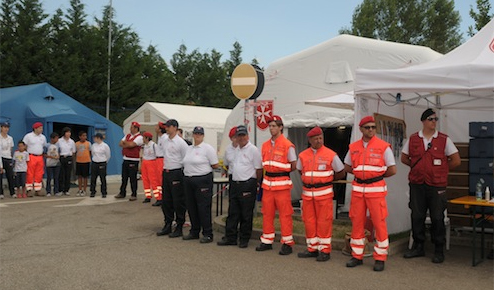 2012 was an extremely demanding year for the Order of Malta’s Italian Relief Corps (CISOM). Twelve months of incessant interventions in which the corps gave the best of itself.  Starting from the end of October 2011 a series of serious emergencies struck Italy in what is called “peacetime” in Civil Defence jargon. In late October 2011 the CISOM worked alongside the communities devastated by torrential rain and hydrogeological instability in Liguria for almost three weeks.  Then, as if this were not enough, a little further north flash floods caused destruction and death in Genoa. A few months later the exceptional snowfalls in the centre north completely paralyzed a part of Italy.  The intervention of the Order of Malta’s Relief Corps was fundamental in that area. We removed trees from roads blocking access to towns, we guaranteed dialysis services to patients by taking them to hospital, we brought medicines and food to old people blocked in their homes and accompanied doctors to their clinics. There was a brief respite to organize materials and ideas and then once again we were reminded that Italy’s fragility also comes from its neglect of earthquake risks. What a lot of peacetime is wasted by not “preparing for war”!

I was one of the first on that May night to arrive in the Civil Defence’s national operations room. With Franco Gabrielli, head of the Italian Civil Defence, one look was enough to understand the extent of the emergency and the work that was in store for the entire country. For the Emilia earthquake, CISOM managed the Bomporto tented camp for five months, thanks to the efforts of some 700 volunteers. A long period during which we gave living proof of the message of solidarity the Order expresses through its volunteers. After which summer was suddenly upon us, when we cooperated with the Italian coastguards for the “Safe Summer” operation and ran the health centre on the island of Asinara, in Sardinia. Not to mention the fires that destroyed a good part of our forest heritage, invaluable not only for improving the air we breathe but also for preventing land erosion. The circle closed with the recent, dramatic floods in the Italian centre north regions, once again bringing death and devastation. The CISOM of Tuscany worked tirelessly to help the communities also in this emergency.

CISOM sharpens its “weapons” – called culture, prevention, awareness, common good – through the “I’m Also Civil Defence” camps for volunteers and citizens of the future, providing training to increase our skills thanks to memoranda of understanding with the bodies and institutions with whom we fight our battles. These include the recent agreements with the Abruzzo and Piedmont regions, and the important one signed with the National Fire Brigade, with whom we will commence a mutual learning curve. But there is one factor in particular common to peacetime and war always and in all circumstances: solidarity.  You just have to see the CISOM Milan group’s work during the winter, with young people and elderly women comforted to know they can spend the night in a place where the warmth does not only come from the heaters but also from the heart. Then again there is the Order of Malta’s camp for the young disabled, the first of which was set up in Tarquinia.  And the support for the La Lucciola ONLUS, the Bomporto charity looking after children with severe learning difficulties, which our Grand Master has also visited.

A time of peace…. Difficult to find it in the series of emergencies we faced over the last twelve months.