World Refugee Day: An Overview of the Order’s Action Across the World 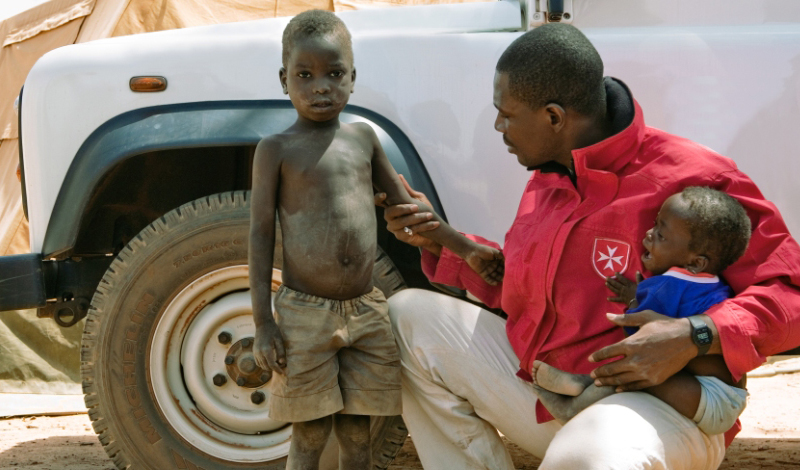 With 60 million people on the move, we are witnessing the highest number of displaced persons in decades. Spawned by armed conflicts in the Middle East, North and Central Africa and South Asia, hundreds of thousands of people have attempted the journey to Europe either by crossing the Aegean Sea from Turkey or the Mediterranean from Libya. Only in the first six months of the year it is estimated that some 2,000 people have drowned trying to reach Italy.

The surge of asylum-seekers in Europe is the greatest wave of refugees to the continent since the end of World War II. Suffering, abuse and exploitation, particularly for children and women, and the loss of life in the desert or at sea, are the dramatic consequences.

In such an alarming scenario, the Sovereign Order of Malta has strengthened its action so to address the mounting demand of humanitarian aid and provide relief to the millions of people taking perilous routes in search of a better life. Its worldwide network of associations, embassies, relief and volunteer corps rooted in 120 countries have scaled up- or in some cases newly introduced- assistance projects based on the local and geographical needs. Although the projects for refugees and displaced people focus primarily on the Middle East, the Order’s action also covers a diverse array of other regions, such as the Democratic Republic of the Congo, Myanmar, South Sudan, Tanzania, Thailand, Uganda and Ukraine.

Here are just a few examples:

From the beginning of the Syrian crisis in 2011 until the end of 2016, around 14,500 families – mostly Syrian and Iraqi refugees as well as needy host community – have been and will receive medical care, food and hygiene kits. Since 2014 a Mobile Medical Unit operates in Wadi Khaled-Akkar area, in North Lebanon at the Syrian border and on request of the government a similar operation has been implemented in the Bekaa area, where 35% of the refugee population live.

The first Mobile Medical Unit in Lebanon was launched by the Order of Malta in 1996, during the “Operation Grapes of Wrath” and was implemented with the collaboration of the Shia humanitarian organization “Imam Sadr Foundation”, with whom the Order of Malta also runs a medical center in the village of Siddikine, near Tyre. As a result, the Order signed an official agreement with the Supreme Shiite Islamic Council of Lebanon. In the same spectrum, the Order also cooperates with the highest Druze authority, providing medical support to their Foundation and has a very special relationship with the highest Sunni authority in the country, Dar Al Fatwa.

Malteser International: supporting refugees where the need is most

In collaboration with local partners, Malteser International, the Order of Malta’s worldwide relief agency, provides humanitarian aid for refugees and displaced people in the north of Syria and Iraq, Turkey, and Lebanon. In 2015, its field hospitals, medical centers, and mobile clinics provided medical care to almost 170,000 sick and wounded people. In total, aid reached more than 266,000 refugees, displaced people, and vulnerable local inhabitants in the Middle East.
In DR Congo at the beginning of May 2016, Malteser International began a project to improve health and hygiene services for 21,000 refugees and vulnerable locals by delivering medication, financing the purchase of medical equipment, training medical staff, and constructing sanitary facilities at health centers. In South Sudan, Malteser International has been distributing essential food aid to internally-displaced people in the city of Wau and has recently introduced a cash voucher system. In Uganda, home to around 270,000 refugees from South Sudan, Malteser International works to provide aid to the refugees living in Rhino Camp. Since 1993, Malteser International has been engaged in a wide-ranging project to support the health of Myanmar refugees – primarily members of ethnic minorities and other groups subject to discrimination– living in refugee camps in Thailand, as well as locals in the nearby villages.

The conflict in eastern Ukraine was reported to have displaced around 1.6 million people by the beginning of 2016. Since May 2015, Malteser International has been working to provide psychosocial help to displaced people and to strengthen local support structures in their host regions. In 2015, psychosocial support was provided by the Order to 4,000 people displaced by the Ukraine conflict

Italy: specialized rescue at sea provided in the Mediterranean

Germany: 25 years of experience in assisting and integrating migrants and refugees

The first facilities for migrants and refugees in Germany were established more than 25 years ago. Today the Order of Malta in Germany is responsible for 140 facilities on behalf of the federal counties and municipalities with space for more than 44.000 refugees. A staff of about 2.400 people and almost 800 volunteers keep those facilities running. In 2015 one migrant out of three was supported by the Order of Malta. This year a new service called “integration pilot” has been introduced to address specific needs of migrants with disabilities.

Across the country – from Vienna to Linz, from Salzburg to Innsbruck – many projects are run by the Order of Malta to facilitate the integration into the local communities of migrants and refugees. Welcome services and medical assistance are provided at the Vienna Westbahnhof (railway station) in co­operation with the Red Cross, the Austrian Samaritan Organization, the municipal rescue service of the City of Vienna and the St. John Ambulance. Across the country, many shelters offer accommodation and Emergency overnight accommodation. In Styria, language courses as well as leisure activities are organized.

Hungary: the Order of Malta at the border with Serbia providing health care

The Hungarian Charity Service of the Order of Malta is currently providing humanitarian aid to the migrants and refugees trying to enter Hungary at the entry points along Serbian border. Families with small children are getting priority with the help of the Office of Immigration and Nationality. Staff of the Order of Malta regularly provide health care assistance and distribute medicines such as painkillers and antifebriles, as well as food and drink to the people in need. In the event of an increase in number of people arriving, the Order of Malta is well equipped and prepared to step up its service.

Slovakia, helping refugees in the most affected countries

The Order of Malta in Slovakia has delivered aid to a refugee camp in Alexandria – in Greece, as a result of the official cooperation between Malteser Aid Slovakia and the