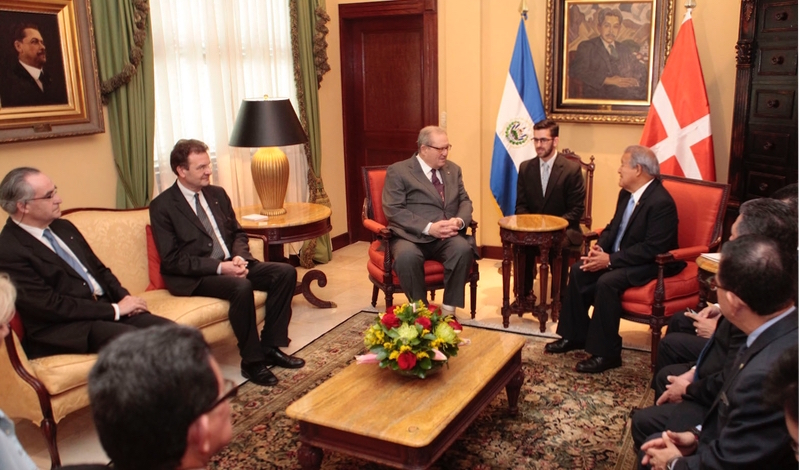 The President of the Republic of El Salvador, Salvador Sanchez Ceren, receiving Grand Master Fra’ Matthew Festing in the presidential palace on 15 February, confirmed his government’s intention to continue to strengthen its bonds of friendship and cooperation with the Sovereign Order of Malta, with whom bilateral relations date back to 1951.

“I extend my warmest welcome to your Highness, on behalf of the Salvadoran people and government. We hope that the warmth and friendship of our people will make you feel at home,” the Head of State said to his guest.

In his speech made during a luncheon in honour of the Grand Master, the President stressed the support offered to this nation in various areas, highlighting the signature of the cooperation agreement between El Salvador and the Sovereign Order of Malta on 19 June 2013. “This agreement aims to set up measures for facilitating, developing and diversifying social, humanitarian and medical cooperation and to provide an effective assistance for implementing healthcare projects for Salvadorans with limited economic resources,” he declared.

President Sanchez Ceren also pointed out the Order of Malta’s support in the medical sector, describing it as “a priority for our country”, especially now with the spread of diseases such as Dengue, Chikungunya and Zika. “Today in our country we have eight clinics run by the Order of Malta’s El Salvador Association, in Zacatecoluca, Sonsonate, Suchitoto, Chalchuapa, Santa Tecla, Coatepeque, Ilobasco and Rosario de Mora. These centres provide general medical treatments and examinations and clinical analysis laboratories”, the President said. “I express our government’s desire to continue to work together to find the best solutions to the problems that the poorer families in our country have to face, who will surely continue to count on the Sovereign Order of Malta’s invaluable support,” he concluded.

On his part, Fra’ Matthew Festing said that his visit to El Salvador would enable him “to see for himself the work carried out by the Order of Malta’s association in the country and the different cooperation projects underway to meet medical needs and to improve the supply of healthcare services”.

The Grand Master also said that the Sovereign Order of Malta’s participation as observer in the Central American Integration System (SICA) is a “great honour” and another important step in the development of diplomatic relations, allowing the Sovereign Order of Malta to offer its experience in programmes for prevention of and assistance to natural disasters, sadly all too frequent in central America.

The President of the Legislative Assembly, Lorena Peña, expressed his appreciation for the visit and the cooperation the Sovereign Order of Malta provides in El Salvador. The Sovereign Order of Malta “has always stood out for its loyalty to our country and its needs and for its solidarity with the poorest Salvadorans. The Order of Malta’s immutable spiritual profile, characterized by a high religious ideal, has allowed it to be an ally and friend when our country suffered great natural disasters,” he said.

The Grand Master said that the Order of Malta and its staff was honoured to be received by the Salvadoran legislative body. Citing two famous intellectuals, the poet Roque Dalton and author and political theorist José Martí, the Grand Master expressed his solidarity with the country. In his speech he also referred to the peace process achieved in El Salvador: “with the signature of peace agreements that ended twelve years of civil war you have given a great example to the whole world”.

During his visit to El Salvador the Grand Master paid homage to Blessed Oscar Romero by visiting his grave and met the Apostolic Nuncio in the country León Kalenga.