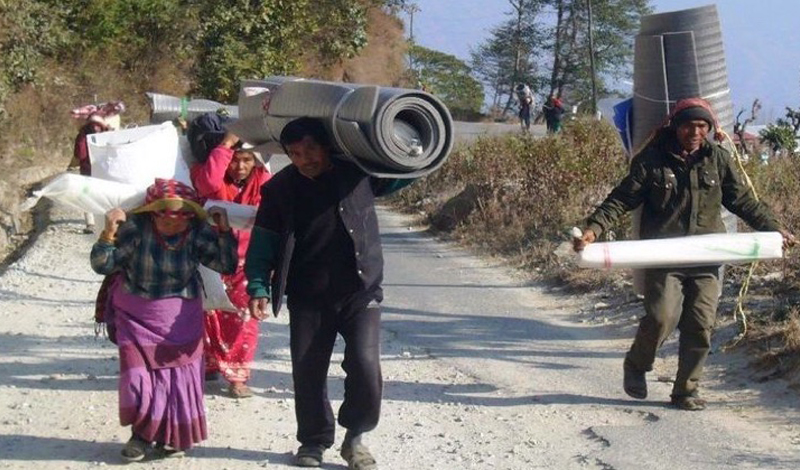 As winter temperatures drop conditions for the refugees living in camps get worse. Teams from Malteser International – the Order of Malta’s worldwide relief agency – have been active in many countries to provide winter clothing, stoves and blankets to families in need.

Iraq: Winter clothing for 13,000 refugee children
The Dohouk region is home to around half a million displaced people who have fled their hometowns seeking safety in the mists of the violent conflict that is consuming the region. At the refugee camps Bersevi II and Khadia, Malteser International has provided 13,000 children and young people with warm clothes and shoes. “Heavy rain and snow, as well as temperatures as low as minus 10 Celsius have made conditions for the refugees, which were bad enough, significantly worse,” reports Malteser International’s Program Administrator Stefan Jansen. “Many of them are spending the winter in tents, so they urgently need blankets and warm clothes.” Since the beginning of 2015, Malteser International has been responsible for a medical center which provides treatment facilities for 10,000 people in the Bersevi II camp. Most of the camp population is composed of Yazidis – a religious group which is persecuted with extreme violence by Daesh. In June 2015, a further medical facility was opened in the Khadia camp for 15,000 refugees and displaced people. The German Federal Foreign Office support this project.

Lebanon: Winter relief for 750 refugee children
The Lebanese association of the Order of Malta began to distribute blankets and winter clothes to refugees last November– long before the onset of freezing winter temperatures and heavy rainfall. Around 750 refugee children from Syria and Iraq living in northern Lebanon’s Beqaa valley, as well as in the diocese of Mount Lebanon were the primary recipients of the material. According to the assessment of the UN refugee agency UNHCR, it is only possible to provide marginal assistance to the more than a million refugees living in the country – a task that will be made even more difficult by the winter.  The many refugees living in the poorest regions of the country, inhabiting improvised tents and shelters, garages or cellars are worst affected, and many of them are unable to access even the most basic of facilities.

Nepal: Aid for almost 1,700 earthquake affected families
The winter emergency is also affecting the communities struck by the Nepal April 2015 earthquake. In the mountain villages north of Kathmandu, Malteser International has been active since December in distributing winter relief packages to almost 1,700 families, “For the earthquake affected families living at high altitude who are still living in emergency shelters, the winter is especially bad,” reports Jürgen Focke, Malteser International’s Logistics and Coordination Manager for the emergency relief efforts in Nepal. Because of political problems related to the implementation of Nepal’s new constitution in September 2015, blockades on the Nepalese border with India – across which most of the country’s essential supplies must pass – have led to severe shortages of food, medicine, and fuel throughout Nepal. Many businesses have been forced to close, and numberless families have lost their incomes. Daily life has become a struggle, and the work of aid agencies has been made immensely more difficult.