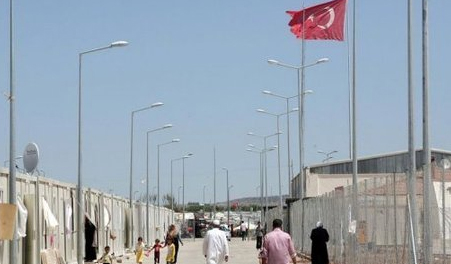 As the Syrian crisis reaches unprecedented proportions, Malteser International, the humanitarian relief service of the Order of Malta, is expanding its help in the region by providing winter relief to nearly 8,000 Syrian refugees in two provinces in Turkey.

Amidst fighting and bombardments along the Turkish-Syrian border, the influx of refugees into Turkey has intensified; last week, a violence outbreak led 9,000 Syrians to flee in a 24-hour period, swelling to over 120,000 the number of registered refugees in Turkish camps. According to news reports, it was one of the largest refugee influxes into Turkey since the beginning of hostilities.

Most of the refugees currently live in 14 refugee camps, which are already filled to capacity with a total of 110,000 people. “At the moment, the Turkish government is concentrating on expanding the capacities of the refugee camps and providing camp residents with winter relief. Refugees outside the camps receive little to no support from the government or international organisations”, says Roland Hansen, head of the Asia department at Malteser International. The United Nations estimates that an additional 60,000 to 70,000 people are living outside of the camps with host families, in rented apartments, or even in empty buildings and warehouses. “The host families can no longer cope with the growing influx of refugees, especially considering the additional costs of heating and clothing for the winter months”, Hansen adds.

With financial support of Germany’s Federal Foreign Office, Malteser International’s partners on the ground will distribute winter clothing for up to 2,000 children and blankets to 1,000 families in Kilis province. In addition, 300 of the neediest families in Hatay province will receive winter relief packages containing stoves and coal for heating in addition to socks, gloves and rain jackets.

These measures complement Malteser International’s ongoing relief activities within Syria, where more than 15,000 displaced people will receive aid packages, and the emergency relief and medical support to more than 500 Syrian refugees in Lebanon. A team from Malteser International’s headquarters will travel to the region on Sunday to assess the current medical needs of the refugee population.