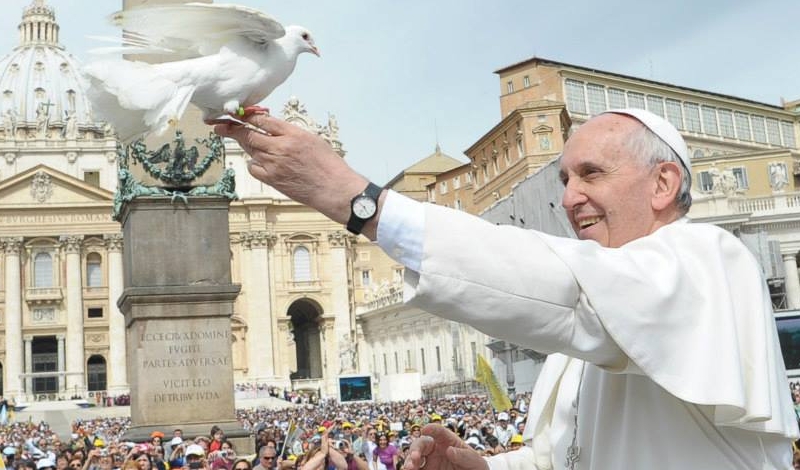 ‘This year, once again, the theme Your Holiness has chosen for your message on the occasion of the World Day of Peace touches a central point in the host of problems that afflict humanity in these years of tumultuous transformations and the increase of risks for the future of the world and for Man.’ Thus opens the letter the Grand Master Fra’Matthew Festing has sent to Pope Francis on the occasion of this 50th World Day of Peace, celebrated on 1st January.

It continues: ‘I wish to express my great gratitude to have been able to bring to the attention of all the consideration of the theme of nonviolence and, inextricably linked, that of violence in relationships between people, states, and the many non-state situations which, for good or bad, have become co-protagonists in the life of the planet. In response to Your Holiness’ message I offer my total support and that of the entire Order of Malta which, even in a difficult and complex time, seeks to render its service in closely adhering to the teaching of the Church and the directions which come from the Successor to St Peter.’

Fra’ Matthew Festing declares that ‘nonviolence is a principle which dramatically calls our attention to the fact of its absence, in whole or in part, in large regions of the world: in Africa, where war and massacres seem to have substituted political rule; in Asia, where developments that will leave a mark on the history of the world can be observed; in Latin America where the praiseworthy mediation efforts of the Holy See encounter problems and opposition which are difficult to eradicate; in the deeply tormented Middle East, a theatre of violence and endless abuse of power; in north Africa, also a land of armed conflicts, and of the mass movement of hundreds of thousands of our fellow men, desperately seeking peace, means of survival and life on other continents; in Europe itself, where in the east there are still conflicts and where the absence of a coordinated approach to the problem of migration causes irrational fears and almost a paralysis which impedes the bringing together of the positive elements of the migration phenomenon and greatly increases the negatives. The nonviolence invoked by Your Holiness is something rare and very valuable.’

The Grand Master emphasises the Order’s commitment in this regard, and that it ‘seeks to alleviate the suffering of so many in over 120 countries: with maternity care in Bethlehem, reception for migrants in Germany, camps for refugees in Lebanon, doctors and nurses on the ships of the Italian Coast Guard in the Mediterranean, and in so many other crisis areas, and now a facility for unaccompanied minors in Rome, which we aim to operate from the end of January. All of this demonstrates the efforts of the Order of Malta, both felt and shared, to adapt to the needs and the challenges in these, our difficult current times.

‘The reference Your Holiness makes to the Sermon on the Mount and the Eight Beatitudes, which in the Order of St John are seen as symbolic of the eight-pointed cross, adopted by the founding fathers of the Hospital in Jerusalem, guides our trust in the benevolence and closeness of the Successor of St Peter to help us to cultivate and uphold the tradition which comes down to us through nine centuries of history and today finds new ways and new means to express its own convinced and shared spirituality.’

The Grand Maser’s letter concludes: ‘I beg Your Holiness to accept the expression of my devotion, and that of the entire Order of Malta, with the assurance of my constant prayers, as well as those of the community of the Grand Magistry and of all of the Order.’