The Order of Malta in Lebanon: help for a war-torn nation 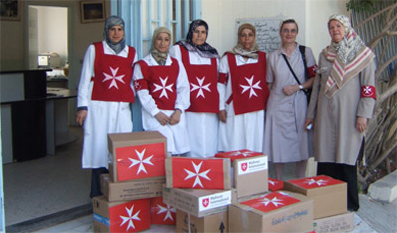 In the land of the cedars, where the poor, the very young and the very old still suffer the effects of the recent war, the independent reporter and sociologist Leandro Abeille has observed the Order of Malta’s effective system to support those most in need. With ten health centres in Lebanon, the Order take care for all who ask for help, without discrimination of race or religion.

This account was published last April in the Italian ‘Polizia e Democrazia’. We reproduce it here.

Lebanon is one of those places where armed conflicts are frequent and merciless. War respects no one, it attacks everyone, rich and poor, children and old people, but it is these last three categories who suffer the most. They suffer because no one helps them, no one comforts them, no one heals their wounds. The tragedy is that you never find a friend under the bombs.

Since 1975 the Order of Malta have opened ten welfare-medical centres:

during the conflicts and in war zones

It was while ruminating on this obvious truth that I came across the historically famous hospitallers. In Lebanon, the Knights of Malta have financed the opening of ten welfare-medical centres since 1975, usually during the conflicts and in war zones. These centres are scattered from north to south and offer everyone a wide range of treatment from first-aid to general and specialist medicine. They work full time in times of peace and full out during the conflicts, at least until something stops them. During the latest clash with Israel, the Order of Malta’s medical care center in Yaroun, south of the Litani river, was bombed and destroyed. It had been evacuated a few hours earlier.

In joint venture with the Islamic foundation Imam Sadr

To manage these centres, the Knights of Malta work with local staff and charitable institutions, mostly Catholic except in the Tyre area where they have launched a joint venture with the Islamic foundation dedicated to Imam Sadr. In peaceful conditions the Lebanese centres cost around two million dollars a year to run, some 80% of which is provided by the Order and the rest self-financed. They therefore operate without public funding.

Unlike almost all the NGOs and many international institutions, the Knights of Malta maintain a policy of recruiting local professionals, keeping foreign staff to a minimum. This is an approach which frustrates those who aspire to international voluntary service, but it has a cost/effectiveness ratio that makes this system an example to copy. There are many advantages: the travelling, insurance and security costs of foreign staff are halved and there is no need for adjustment or cultural mediation. Also by hiring local people one tends to boost the local economy without upsetting the fragile domestic markets. Specialized personnel are only sent when they cannot be found locally.

An example of how skills can be found among local people is my guide to the Order of Malta’s centres. My guide was a young Lebanese woman of 28 who has been working for the SMOM for two years. She has a degree in Economics and a master in Business Administration, and assists in the management of the ten centres with the eight-pointed cross present in Lebanon. Courteous and professional, she represents the Order in relations with medical and paramedical staff and cooperating bodies. She works ten to twelve hours a day, seven days a week and speaks the local language as well as English and French.

Our story instead leads us to Ain el Remmaneh, opened in ’89 and which for years has been offering medical treatment in a no-man’s land, a buffer zone, between Christians and Muslims, when belonging to one group or the other meant being killed. Today it is a centre of excellence in the local medical scene, a diabetes centre, with specialists in cardiology, angiology, internal medicine, otorhinolaryngology, ophthalmology, dermatology, gynaecology, pediatrics, endocrinology, oncology and also dietetics, psychiatry, psychology and physiotherapy. All the doctors and paramedicals are Lebanese, coordinated by a sister from the ‘Daughters of Charity’. Modern analysis laboratories are also available in the centre.

Looking at the luxurious hotels and wealthy banks surrounding Beirut alongside the Order’s hospital headquarters could make one think that a humanitarian-medical centre is unnecessary. Nothing could be further from the truth. Here the few wealthy people are super rich but the poor are really poor and there are many of them. However, unlike other charitable institutions, the Order’s policy is to ask for payment according to possibility. This system means achieving an economic minimum for self-financing some activities, avoiding parasitism and a generalized use of structures set up to treat people who have urgent need.

In the Order’s centre, a gynaecological examination costs 7 euro; the average price in Lebanon is around 50 euro, and many pay the entire price, the less well-off pay half price and those who have nothing pay nothing. The doctors and operators are local, they know who is really poor and who is ‘trying it on’; there are no ‘friend of friends’, and nothing escapes the French sister’s watchful eye. The figures which prove the fairness of this system (and the sister’s vigilance) say that in 2006 the centre provided 29,846 total services to around 11,000 patients, of whom 1,327 paid nothing and 3,311 paid half price, which means that over 6,000 patients paid the full price.

The Knights of Malta are famous in Italy for motor rehabilitation and in the Lebanon they finance a centre for children’s rehabilitation. This centre is situated on the hills overlooking Beirut in a peaceful setting surrounded by greenery and with buildings recalling the beautiful American University. Sister Maria Genevieve runs it.

The Zouk Mikael centre looks after 92 autistic children and those with psychomotility problems, of which 38 are in-patients and 54 are semi-residential. There are 65 health workers, mostly orderlies, teachers and nurses, as well as a doctor, a psychologist, a social worker, four physiotherapists, two speech therapists, two psychomotility therapists and two speech pathologists, all Lebanese professionals. The structures are leading-edge, from computers with re-educational programs to swimming pools for rehabilitation and other physiotherapeutical equipment.

The children attend the school inside the centre, with dedicated and alternating support teachers and receive the necessary medico-rehabilitative therapies. The day finishes at 2 p.m. for the semi-residential children, whilst the others return to their mothers in their rooms with en-suite bathrooms and cooking facilities. The centre is not a paradise on earth, it is a place of desperation and suffering but it is well kept and very clean, the workers are kind to their small patients and the children seem to be happy there and laugh gaily when I pull faces at them.

Perhaps other institutions should adopt

the logistic and administrative system the Order of Malta applies

The hospital and the rehabilitation centre are rare pearls in the Lebanese health scenario and in that of the crisis areas. In the Order’s centres you could be in a good European hospital, with the same professional and hygienic standards. Here the patients are not people to save ‘as best one can’, to help as much as possible, wretched people who have just to survive, but ‘our lords the sick’ as they were called a thousand years ago in the hospitals of the Knights of St. John. The difference is immense. Perhaps the other institutions and NGO’s should adopt the logistic and administrative system the Order uses in its missions, but perhaps the spirit is different, perhaps tradition helps. The fact is that everything works.