The President of the Italian Republic receives the Ambassadors 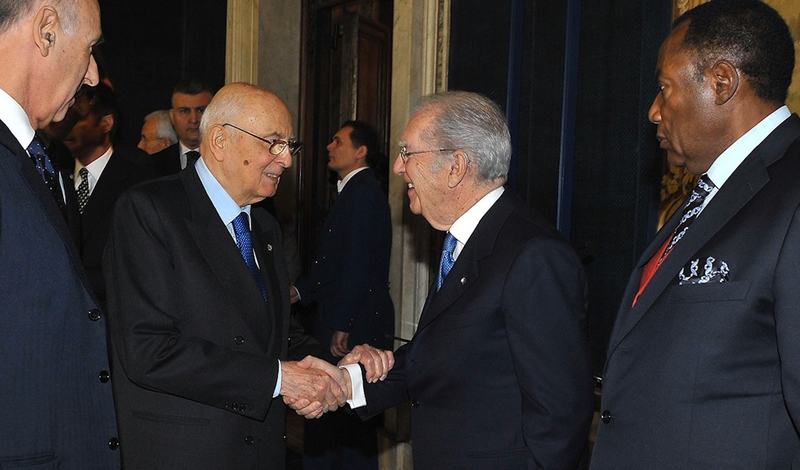 The President of the Republic of Italy, Giorgio Napolitano, received the diplomatic corps in the Quirinal Palace to exchange new year’s greetings. On this occasion, the ambassador of the Sovereign Order of Malta, Giulio di Lorenzo Badia, vice-doyen of the diplomatic corps, took the floor and gave the following speech.

At the end, the President of the Italian Republic thanked Ambassador Lorenzo Badia for “your eloquent and meaningful words on behalf of the ancient and noble institution you represent”.

Dear Mr. President,
At this moment in time, in expectation of the arrival of the Papal Nuncio Monsignor Adriano Bernardini, who will assume the role of Dean of the Diplomatic Corps, I have the privilege of representing the Heads of the Diplomatic Mission to Italy in extending to you and to your family our best wishes for Christmas and New Year.

2011 is coming to an end, and this great Country which hosts us all has had so many important challenges, and you Mr. President have been able to decipher and understand so well the hearts and minds of the Italian people in a truly inspirational manner. I recently attended an event at the Auditorium with several foreign Ambassadors, and the very warm and heartfelt standing ovation you received on that occasion was a clear sign of the high level of trust Italian citizens have in you.

This year you celebrated the 150th Anniversary of the foundation of the Italian State. Over these many years Italy has overcome several difficult challenges and is today one of the most industrialised nations of the world. We admired the strenuous efforts Italy made internationally with the United Nations, and within the Atlantic and Mediterranean communities to develop the causes of peace, human rights, economic growth and religious freedom. On this last point, we all observed the strong relationship Italy has with the Holy See when newly elected Prime Minister Mario Monti saluted Pope Benedict XVI at Fiumicino Airport, when the Holy Father was about to start his journey to Africa following the important inter-religious meeting held in Assisi in October.

Mr. President, we were at the Chamber of Deputies on March 17th when you delivered the celebratory speech for the 150th Anniversary of the Unification of Italy. In this keynote speech you declared that ”Italian Unification represented an extraordinary historic undertaking because of the times in which it happened, the content and momentum it gathered, and the success it obtained which surpassed many expectations and honoured the most challenging hopes.” Later in the year on May 5th we attended the fine concert you kindly offered to His Holiness Benedict XVI for the anniversary of his elevation to the Papal throne. On June 2nd we as Ambassadors accompanied more than 40 heads of state to the Military Parade, and to the following meeting at the Quirinale in commemoration of the 150th anniversary of the Unification of Italy. These were unforgettable events which further elevated the image of Italy around the world!

Italy has had a long journey. It is a country which saw 25 million people emigrate with broken hearts to find work in far away places. Today, thanks to their sacrifices, Italian communities around the world number several millions who hold their land of origin close to their hearts. These people have created a strong bridge of friendship and cooperation between Italy and the many countries around the world where they reside. It is well known that in recent decades Italy has become a country of immigration, where 7% of the population is now represented by foreigners, and more than 500,000 children have been born to immigrant parents and now hope to have Italian citizenship conferred on them. In this new framework, many Diplomatic Missions which in the past managed the many visa applications into their countries now see other Missions overseeing the arrival of their people who see Italy as a land of opportunity where they can find dignified work.

Mr. President, this year you have spent many days visiting foreign countries as well as many Italian cities where many young and unemployed people were regarded you with eyes full of hope, thinking of their future. Our thoughts and prayers are with them! Today, Mr. President, it is evident that Italy, a founding country of the European Union, has been committed to play its part in confronting this important moment of economic crisis which faces the Eurozone. We wish to express our hopes that Italy will soon overcome these difficult times.

I would like to add a personal note which I believe will be shared by my colleagues. I have spent 40 years serving Italy in the Diplomatic service, and 15 years with the Order of Malta which operates around the world in the humanitarian and health sectors abiding by its ancient motto:
“obsequium pauperum et tuitio fidei” care for those in need, and living a Christian example). In this context we would like to thank you for the warm welcome Italy offers Diplomatic agents through the Protocol Department of the Quirinale and the Diplomatic Protocol of the Italian Republic. In my opinion Italy does not only apply the Convention of Vienna, but offers its hospitality with friendship and warmth to all Diplomatic Missions.

A renewed wish to you Mr President, to the Prime Minister, and to the new Minister of Foreign affairs, Ambassador Giulio Terzi di Sant’Agata who recently undertook two important missions to the United Nations and Washington, in the hope that 2012, with the help of God, will offer a brighter and more serene future. 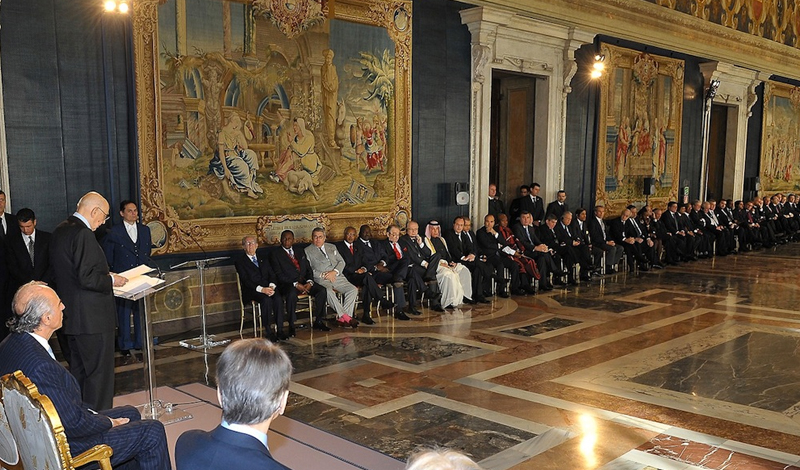 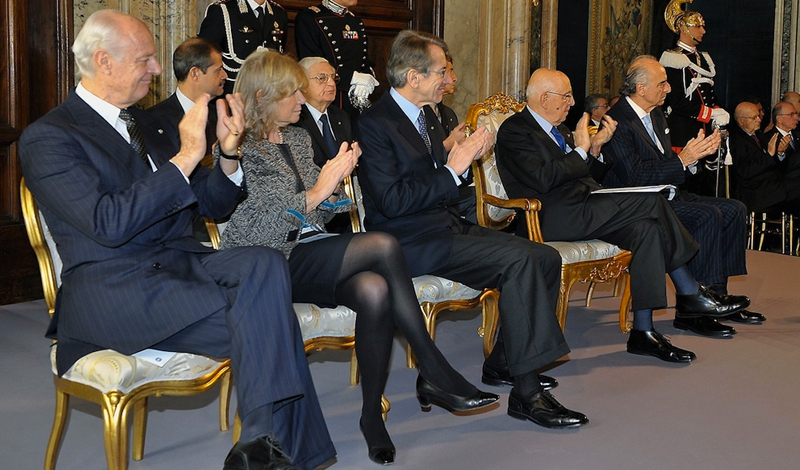 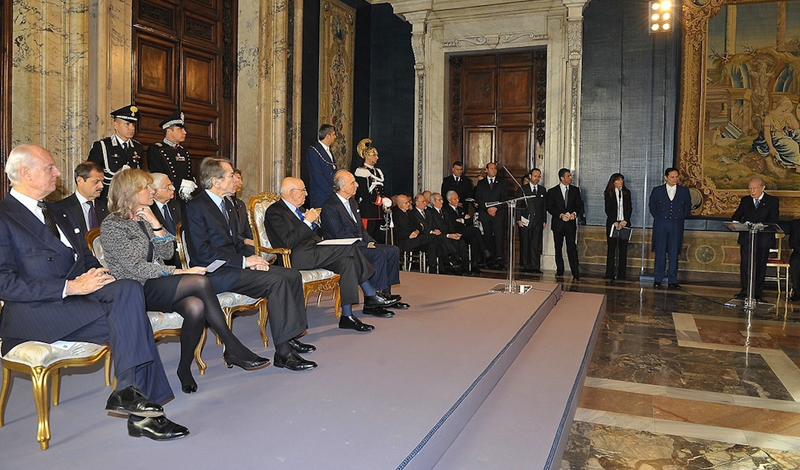