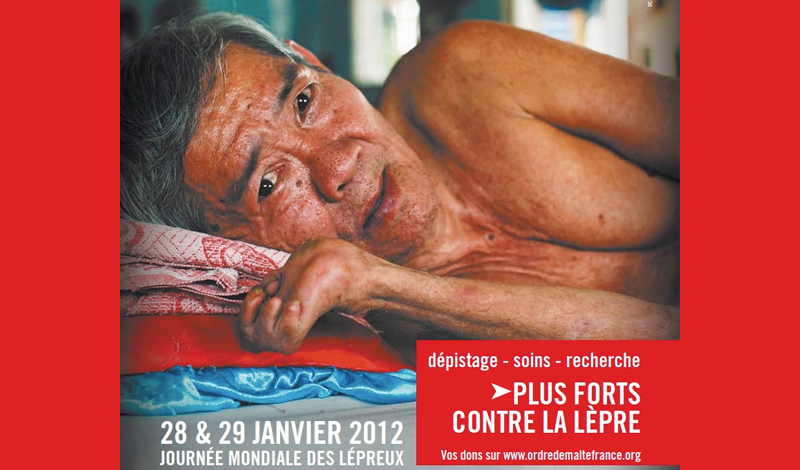 More than 10,000 fundraisers from Ordre de Malte France gathered over the weekend in cities and towns all over the country – 106 administrative divisions – to support the fight against leprosy. The disease affects more than 210,000 individuals every year, of which 20,000 are children.

The funds ensure continuing support from Ordre de Malte France to treat the disease through screening, home and clinical care and rehabilitation, as well as training physicians and health personnel, and financing research. The Order of Malta in France, through its MALTALEP programme, finances primary and clinical research into leprosy in the developing world.

What is leprosy?
Leprosy is a chronic infectious disease that evolves very slowly (incubation can be up to twenty ears). It primarily affects the skin, the peripheral nerves, the mucous membranes of the upper airways and the eyes. To date, there is no vaccine, but an inexpensive, effective Multi Drug Therapy (MDT) treatment has meant cure for more than 14 million patients since 1982 (source: WHO).

Progress towards the goal of eradication
Ordre de Malte France has participated in World Leprosy Day since its creation in 1954. During these years, thanks to donations and the involvement of volunteers, there has been significant progress:
– In fifteen years, leprosy has been eradicated in 98 countries, but it is still present in roughly one hundred countries today.
– Since 2002, the disease has sharply declined, but 65% of new cases appear in the most contagious form.
– In 2011, 2.5 million lepers were cured, but they suffer from severe crippling relapses.

Reintegrating patients thanks to plastic surgery and rehabilitation
Because of the visible results of leprosy (hands without fingers, leg amputations, blindness) many thousands of sufferers are excluded from society. Ordre de Malte France is implementing plastic surgery, bracing and rehabilitation programmes in many countries to assist patients to reintegrate professionally and socially.

Order of Malta on the ground in the most affected countries
The Order of Malta cares for leprosy patients on three continents, and has cared for sufferers of this disease throughout its nine hundred year history. Today, its care and assistance programmes operate in: Asia (India, Laos, Cambodia, Vietnam); Africa (Niger, Guinea, Cameroon, Central African Republic, Senegal, Mauritania, Gabon, Benin, South Sudan, Kenya, Egypt) and South America (Brazil).