Canonization of John XXIII and John Paul II: the commitment of the Order of Malta’s volunteers 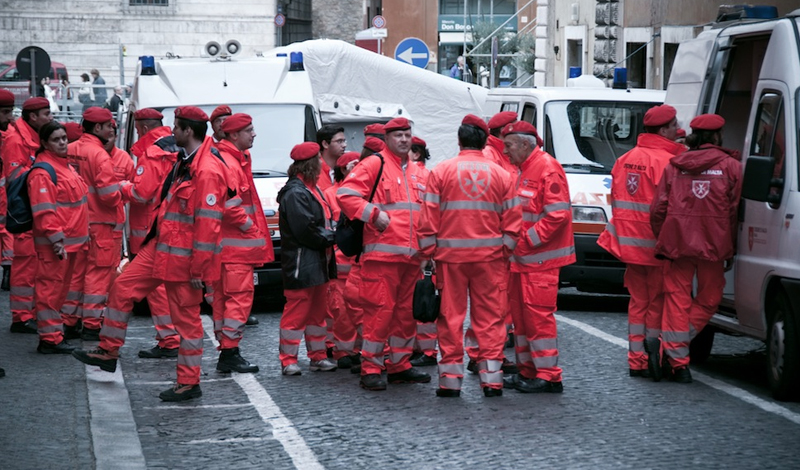 For three days running over 400 volunteers will be deployed in St. Peter’s Square and surrounding areas to provide medical assistance

Rome is preparing for a memorable event: from Saturday 26 to Sunday 27 April hundreds of thousands of pilgrims will flock into the capital to participate in the historic celebrations in St. Peter’s Square for the canonization of two popes, John XXIII and John Paul II.  Heads of state and government from all over the world, including the Grand Master of the Sovereign Order of Malta, Fra’ Matthew Festing, will be there.

According to official estimates, over a million faithful are expected.  Some 2500 police officers and 2500 volunteers have been mobilized to cope with the influx of people. The Sovereign Order of Malta’s volunteers are among them, ready to provide medical assistance and first-aid to the pilgrims.

Operational 365 days a year, the Order of  Malta’s first-aid post – located a few metres from the entrance to the basilica – has intensified its staff for the occasion, composed of doctors, nurses and emergency personnel present over 48 hours on Saturday 26 and Sunday 27 April. Thanks to five posts placed around St. Peter’s Square, the Order of Malta’s volunteers can intervene rapidly via radio links.

The Order of Malta’s Italian Relief Corps will instead  operate in the areas around St. Peter’s Square from 8.30 on Saturday 26 April until  20.30 on Monday 28 April. This widespread deployment of over 300 volunteers with the octagonal cross will be flanked by 17 volunteers from the Order of Malta’s Polish Association, come to Rome for the event

Of the Order of Malta’s 300 volunteers, over 150 doctors, nurses and  emergency personnel will be working in the medical facilities and in the ambulances.  The other 150 will be at the disposal of the Civil Defence of  Roma Capitale for services linked to the enormous influx of pilgrims.

“Once more,” says Mauro Casinghini, National Director of the Order of Malta’s Italian Relief Corps – we will be participating in a historic event that, as occurrred for the funeral of John Paul II in 2005 and for his beatification in 2011, will be a mixure of emotions and professional commitment to ensure first-aid  services for  the faithful”.

Over 30 facilities will be in use, including the advanced medical post halfway up Via della Conciliazione.