International cooperation agreement between Hungary and the Order of Malta 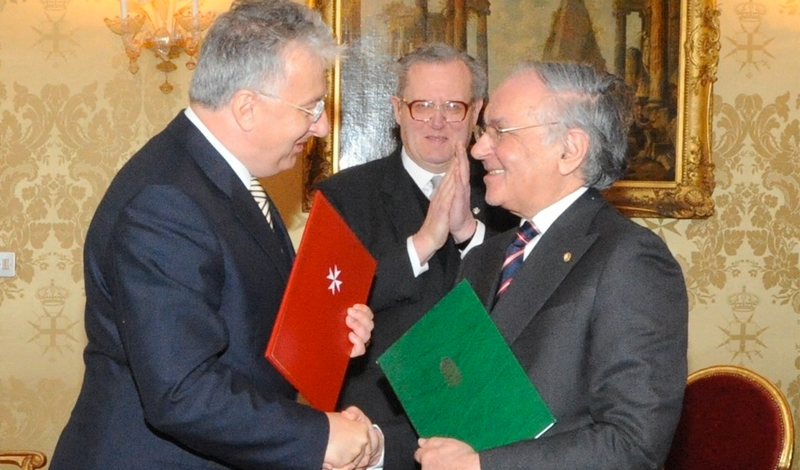 On 9 March Fra’ Matthew Festing, Grand Master of the Order of Malta, received the Deputy Prime Minister of the Hungarian Republic Zsolt Semjén in the Magistral Palace in Rome. During the meeting there was an exchange of ratification instruments for the international cooperation agreement between the Republic of Hungary and the Sovereign Military Order of Malta signed in Budapest on 3 November 2010.  This agreement, ratified with a large majority by the Hungarian Parliament on 29 November, strengthens the Order’s healthcare, welfare and humanitarian services in Hungary.

The form and content of the interstate agreement – binding at international level – respects the Vienna Convention on the Law of Treaties. The Republic of Hungary and the Hungarian government undertake to promote the Sovereign Order of Malta’s relief corps’ work in Hungry (article 4), guarantee their financial backing (article 5) and other means of support (article 6), including protection against third parties’ abuse of the Order of Malta’s flag and coat-of-arms  (article 6, comma 2). It also grants customs and tax exemption for importing goods (article 7), as well as freedom of movement inside the Hungarian territory (article 8).

“An historic agreement, testifying to the excellent relations between the Hungarian government and the Sovereign Order of Malta,” Deputy Prime Minister Semjén announced, stressing the significance of the agreement for Hungary. “The government considered it a priority, and this is why Parliament agreed, signed and ratified it in record time”.  “This very symbolic exchange,” Grand Chancellor Jean-Pierre Mazery stated, “reasserts our joint determination to consolidate and intensify our common efforts in the welfare, healthcare and humanitarian services”.

Founded in 1989, the Magyar Máltai Szeretetszolgálat (MMsz), the Order of Malta’s relief corps in Hungary, has 5000 regular and 15,000 casual volunteers. Led by Padre Imre Kozma, the Order of Malta’s Chaplain, it is now one of the major welfare organizations in the country and trusted partner of Hungarian institutions. It has 350 branches, 142 local volunteer groups, 210 institutes and 840 employees. The MMsz also works in the civil defence area with its own team to assist victims of natural disasters both in Hungary and abroad.