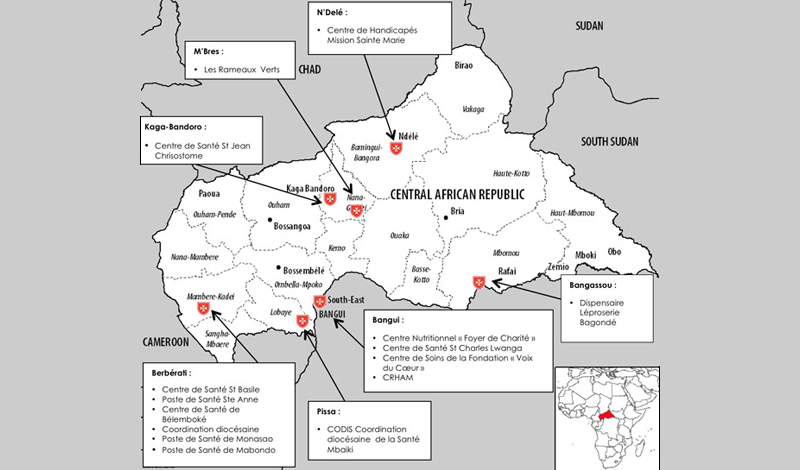 More than 1000 people have been killed over the last three weeks in Bangui, capital of the Central African Republic, scene of violent clashes between the armed militia groups. The civilian population, and especially children, are the main victims of the violence since schools, hospitals and churches are pillaged daily. According to the UN’s latest estimates, over 800,000 civilians have been forced to abandon their houses since the beginning of the aggression in December 2012. Of these, 68,000 have fled to neighbouring countries.

Ordre de Malte France has been present in the Central African Republic for over 30 years, supporting facilities and associations all over the country, and especially in the western part. Every year over 3000 malnourished children are helped and some 90,000 medical examinations are carried out in the health facilities the Order of Malta supports.

Following the new wave of violence, Ordre de Malte France has sent further medical equipment and supplies (medicines, needles, tourniquets, gloves) for local hospitals and paediatric clinics around the capital. All the material was distributed by the Order of Malta’s embassy in the country.

During the first weeks of 2014, Ordre de Malte France also plans to replenish 14 health centres the Order of Malta supports with other medical supplies. This operation will help 100,000 people, including many malnourished children.