President of the Republic of Slovenia receives Grand Master 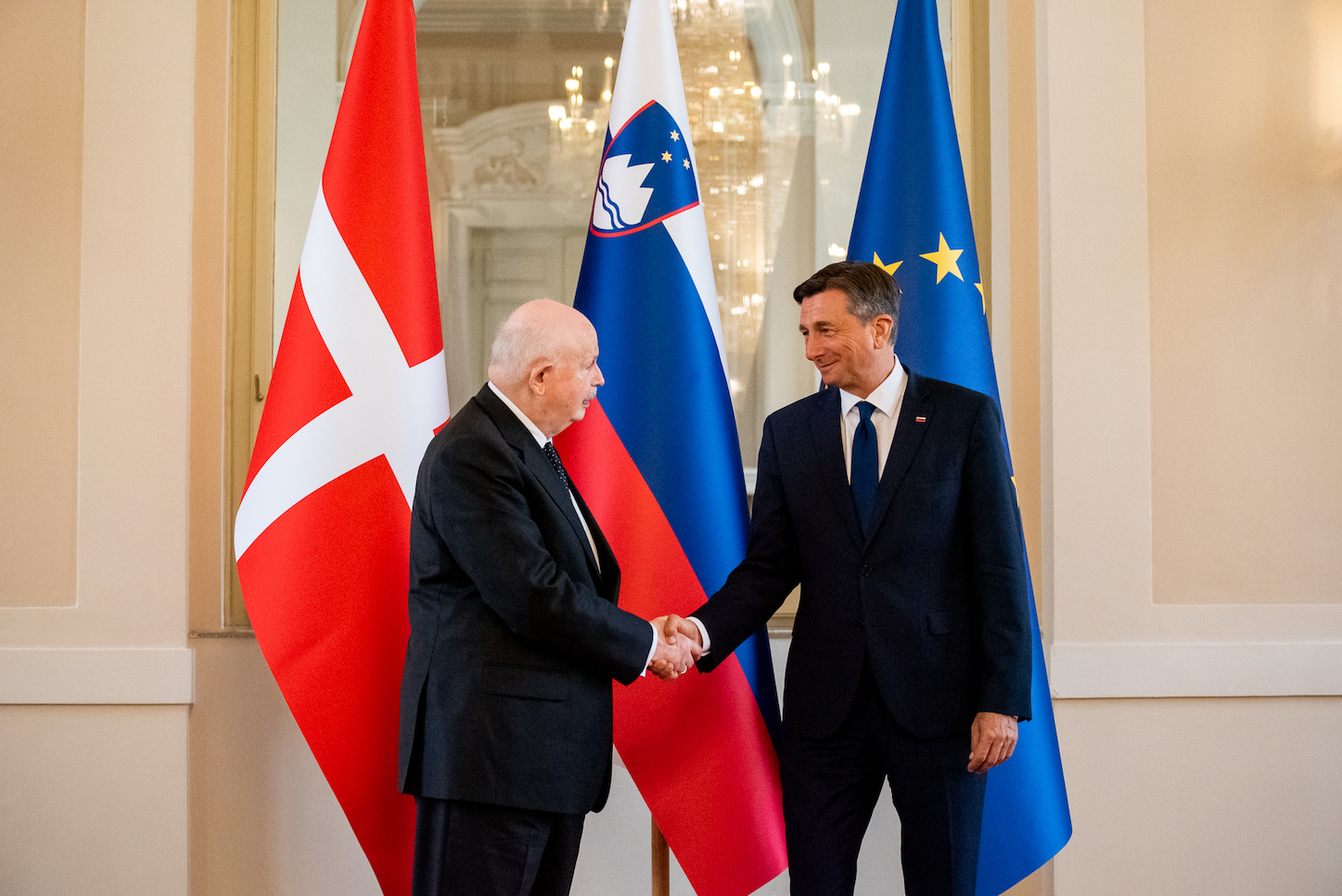 Cooperation in the social and humanitarian sectors discussed

On 17th June, the President of the Republic of Slovenia, Borut Pahor, received the Order of Malta’s Grand Master Fra’ Giacomo Dalla Torre del Tempio di Sanguinetto. After military honours in Congress Square, Ljubljana, the grand master laid a wreath at the monument to the victims of all wars, paying tribute to their memory.

President Pahor and the grand master then had a private meeting in the presidential palace followed by one extended to the two delegations. The excellent relations between Slovenia and the Sovereign Order of Malta are mostly focussed on initiatives in the welfare sector.

During the talks, the president of the republic pointed out that “the establishment of diplomatic relations between the Republic of Slovenia and the Sovereign Order of Malta dates back to July 1992, as we were about to become an independent state”. The president added that “this cooperation is linked to the order’s primary mission of caring for vulnerable people – the sick, the disabled, people with incurable diseases – not covered by the national health service, as well as assistance during natural disasters or humanitarian crises”.

Also discussed were foreign-policy issues, such as the future of the EU, multilateralism, the current situation in the western Balkans and immigration strategies. The possibility of opening cooperation to international projects in third countries in which the Republic of Slovenia has no permanent representatives was also examined.

The president recalled the Sovereign Order of Malta’s efforts, with other humanitarian organizations, to tackle the migrant crisis Slovenia faced in 2015 and its effective response to the problems caused by the 2014 extreme winter conditions and following floods. ‘Malteser Aid Slovenia’, part of the Order of Malta’s Slovenia Association, was awarded the Civil Protection Bronze Medal in recognition of aid provided during the cold-weather emergency in Slovenia.

Meetings with the Prime Minister and Speaker of Parliament

After the meeting with President Pahor, the grand master was received by the Prime Minister Marjan Šarac and by the Speaker of Parliament Dejan Židan.

On 15th June, the grand master – with some 4000 pilgrims, many of whom were sick and disabled – attended mass in Brezje celebrated by the Archbishop of Maribor, Msgr. Alojz Cvikl, with another 40 priests. For many years, the Order of Malta’s Slovenian Association has been assisting pilgrims in the Sanctuary of Our Lady Help of Christians. Addressing pilgrimage participants, Fra’ Giacomo Dalla Torre del Tempio di Sanguinetto said: ‘I will treasure the memory of this day of prayer with you and the Sovereign Order of Malta’s members and volunteers who provide assistance in the sanctuary, especially during the larger pilgrimages. I will preserve in my heart this venerated image that protects Slovenia and its inhabitants, happy to have been able to pray to the Madonna of Brezje to whom I entrust the Sovereign Order of Malta, its members, its volunteers and its work.”

Meeting with the Slovenian Association

On 16th June, the grand master attended mass in the church of Gora Oljka with the members of the Slovenian Association. Afterwards, as guest of the Mayor of Polzela, Jože Kužnik, he visited the Order’s ancient Commenda. A marble lion found in the castle and the octagonal cross now constitute the municipal coat of arms.