The Grand Master at the Central American Integration System (SICA) 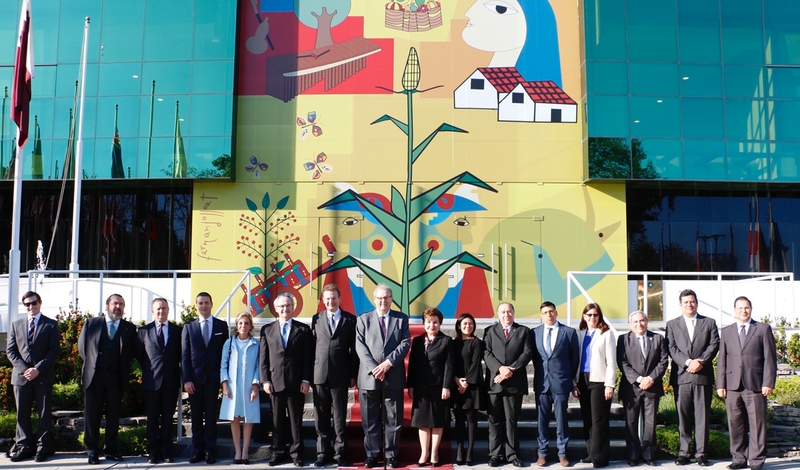 During the meeting, Fra’ Matthew Festing said that “as extra-regional observer of SICA, we admire and support your efforts to integrate the countries of central America so that the region can act to bring about peace, fostering development and respect for the defence and promotion of human rights.”

Secretary General de Aviles, thanking the Grand Master for his visit, said that “the Sovereign Order of Malta has a significant presence in the eight countries of the region, so it is easier to identify areas of common interest, establish mechanisms of cooperation and contribute to the development of activities that promote the wellbeing of our people”.

Following this line, the Grand Master said that an action plan will shortly be prepared with the SICA Secretary General to identify specific sectors for cooperation in healthcare and assistance to the elderly and protocols for responding to humanitarian crises.

The meeting in the SICA headquarters took place within the framework of the Grand Master’s State Visit to El Salvador.

The Sovereign Order of Malta and SICA
On 26 November 2015, the Secretary General of SICA and the Sovereign Military Hospitaller Order of St. John of Jerusalem, of Rhodes and of Malta signed the agreement admitting the Order as extra-regional observer.

With the signature of this document, the Sovereign Order of Malta joins the group of friendly countries participating in the activities and progresses of the integration process with the purpose of identifying joint projects and to establish cooperation mechanisms and contribute to the development of the central American region. SICA – an economic, cultural and political organization – unites Guatemala, El Salvador, Honduras, Nicaragua, Costa Rica, Panama, Belize and Dominican Republic.