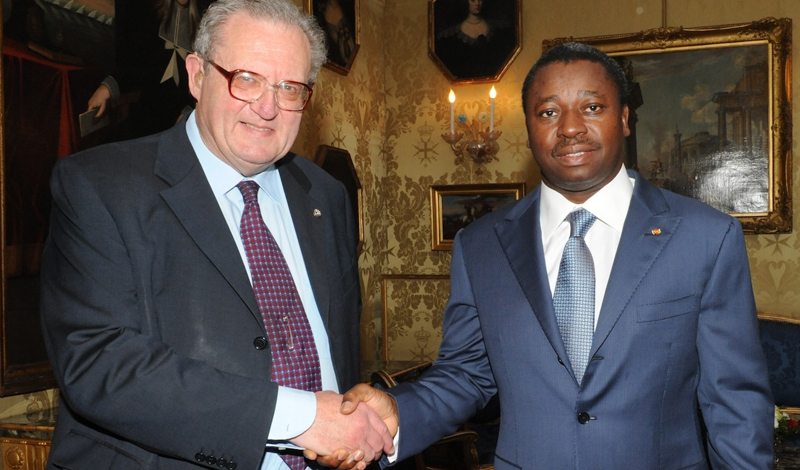 The President of the Republic of Togo, Faure Essozimna Gnassingbe, was received today in the Magistral Palace by the Grand Master of the Sovereign Order of Malta, Fra’ Matthew Festing.

“I would like to stress how happy Togo is to count the Sovereign Order of Malta, the oldest humanitarian order in the world, as its friend,” said President Gnassingbe, accompanied on this occasion by the Foreign Minister Elliott Ohin. “The Order of Malta is developing concrete projects in Togo for the disadvantaged. Following its hospitaller vocation it is combating disease and insecurity,” the President added, mentioning the hospital in Elevagnon, “a facility,” he said, “ that modernizes every year”.

During the talks, the Grand Master recalled the 40 years of friendship and cooperation following the diplomatic relations established in 1973 between the Sovereign Order of Malta and the Togolese republic. “After the Cooperation Agreement in 1978,” the Grand Master said, “the Order of Malta launched a series of health and humanitarian activities, including the hospital at Elevagnon in 1981, where some ten thousand medical examinations are carried out and 400 children born every year”. The Ordre de Malte France also runs dispensaries, health centres and a nursery school around the country.

“I’m certain that this visit will further strengthen our already fruitful cooperation,” the Grand Master added, praising the efforts made by the Togolese president to preserve peace, security, development and consolidate democracy. “Your commitment in spreading peace and prosperity in other African nations became even more evident after your country was elected to serve as a non-permanent member of the UN Security Council in October 2011, of which Togo assumed the presidency for the second time last month,” explained Fra’ Matthew Festing.

The Grand Master offered a luncheon in honour of the President of the Togolese Republic and his delegation, attended by the Order of Malta’s high offices and representatives of the diplomatic corps.