The Order of Malta receives the Reverend Pizzaballa, Custos of the Holy Land 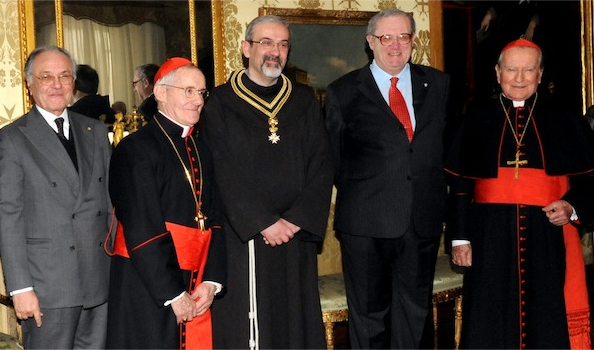 The Custos of the Holy Land, the Reverend Pierbattista Pizzaballa, was received yesterday in the Magistral Palace. He was greeted by Grand Master Fra’ Matthew Festing who conferred on the  Custodian of the Holy Mount Zion and of the Holy Sepulchre, as well as Minister Provincial of the Friars Minor in the Middle East, the decoration of Grand Cross Conventual Chaplain ad honorem.

Present were Cardinal Jean-Luis Tauran, President of the Pontifical Council for Interreligious Dialogue,  Cardinal Andrea Cordero Lanza di Montezemolo, Archpriest Emeritus of the Saint Paul Outside-the-Walls Basilica, ambassadors and diplomatic representatives from a wide area of the Middle East, besides the Grand Master, the Grand Chancellor Jean-Pierre Mazery, and the Order of Malta’s senior government.

“We are grateful to the Friars Minor of the Custody of the Holy Land for their presence and testimony, for their assistance to pilgrims in the Holy Land and for protecting the holy places,” Fra’ Matthew Festing said in his speech. The Custos of the Holy Land stressed the importance of  the two Orders’ common roots and, addressing the Grand Master, explained that “while you are celebrating 900 years of service to the “least of us”, we are celebrating 800, but the mission is the same”.

“Our relations with the Order of Malta are excellent and I want to express my heart-felt appreciation for its work,” concluded the Reverend Pizzaballa with reference to two of the Order of Malta’s projects in the Holy Land, and in particular the maternity hospital in Bethlehem,  in which some 57 thousand children of every race and religion have been born since 1990, and the Pro Tantour Foundation for assisting the elderly in the Beit Safafa-Tantur area of Jerusalem.

“This last project,” added the Grand Master, “also has the support of the Custodians of the Holy Land”.