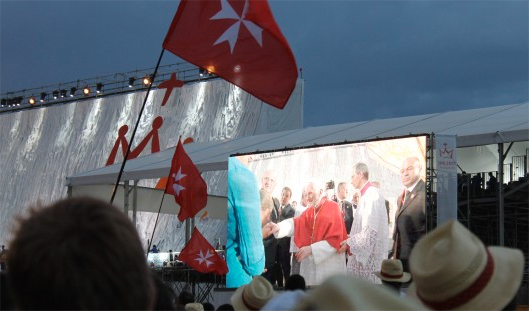 Over 120 volunteers of the Order of Malta, coming from many different countries, took part in the World Youth Day 2011 held recently in Madrid.  The volunteers contributed to the smooth-running of this highly organised event and were assigned specific duties.  Being part of a group of 600 volunteers they ensured that over 4,600 disabled people were able to participate.  Among the main tasks: transportation of the sick and disabled, accompanying them and assisting them during the main events and celebrations with Pope Benedict XVI.

The volunteers of the Order of Malta, under the coordination of the Spanish Association, worked side-by-side with medics and two teams of experts: one from the Order of Malta Italian Relief Corps, and the other from Malteser in Germany.

On Saturday and Sunday during the vigil and final mass celebrated by the Pope in the vast space of the airbase of the Quattro venti, in about 40 degree heat, the volunteers and medics of the Order of Malta, despite not having been assigned medical care tasks, provided care for 200 people.  The majority were suffering from faintness caused by the severe heat.

A young Spaniard, Gonzalo Canovas – a great friend of many of the volunteers of the Order of Malta having participated in many International summer camps for the disabled – had the privilege of having lunch with Benedict XVI.  During the conversation  Gonzalo told the Pope that he was there “thanks to the Order of Malta”.  The Holy Father then asked him to “convey his personal greetings and thanks to all the volunteers of the Order”.

A true celebration of youth under the Christian banner, the World Youth Day 2011 has seen the participation of over two million young pilgrims, coming from five continents.