Four years of war in Syria: “One of the worst humanitarian disasters of our times” Health care nearly collapsed, neighbouring countries close to the limit of their capacity

March 15th will mark the fourth year since the beginning of the uprising in Syria, and a political solution to the crisis continues to be nowhere in sight. Malteser International, the Order of Malta’s relief service for humanitarian aid, appeals to the international community to strengthen its efforts to alleviate the enormous, unprecedented plight of the civilian population.

“The Syrian crisis has become one of the worst humanitarian disasters of our time. 16 million people in the region are in urgent need of humanitarian assistance,” says Oliver Hochedez, Malteser International’s emergency relief coordinator. “Medical infrastructure and health care in Syria have nearly collapsed, and the neighboring countries, where hundreds of thousands of Syrians have fled, are close to the limit of their capacity. Humanitarian aid workers within Syria face the most difficult, dangerous conditions.”

Syria counted on an advanced, functional health care system before the war. Today, more than half of all hospitals have been destroyed or severely damaged due to the conflict. “Every day, in Syria, about 1,500 babies are brought into the world under the most difficult conditions and without any medical help,” Hochedez says. “The few medical facilities still operating lack medicines, medical staff, electricity and running water. Often, doctors have to perform surgery without anesthetics.” Syrians not only lack access to emergency care for war injuries, but also to basic health services, such as a regular check-up or dental visit.

Together with local partner organisations, Malteser International provides medical assistance to refugees and displaced persons in Syria, Lebanon and Turkey. “In our field hospital in the Turkish border town of Kilis, we have treated about 80 Syrian refugees per month since September of 2013 – more than half of whom are children under 15,” says Hochedez. “A large proportion of patients must learn to live with permanent disability due to their war injuries. We offer them physiotherapy sessions so they can better deal with their disability and improve their mobility.”

Medical teams, operated from Turkey in cooperation with Turkish and Syrian partners, provide medical assistance for internally displaced people in northern Syria. In northern Lebanon, a mobile clinic run by Malteser International visits and treats both refugees and needy locals in remote villages. 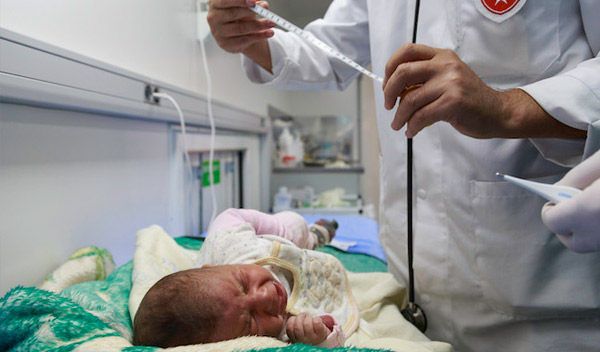