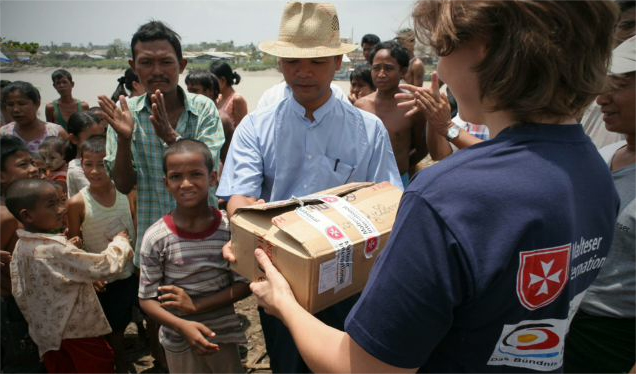 The Order’s worldwide relief service, Malteser International, on the ground in the devastated region

Present since 2001 in Myanmar, the Order of Malta’s worldwide relief service was among the first to assist the victims of the devastating Nargis cyclone in early May, for which the official death toll now stands at 100,000, with over 1.5 million homeless.

The Order of Malta was the point of reference for channelling international Catholic aid.

Six months after cyclone Nargis devastated large parts of Myanmar, Malteser International considers and evaluates the success of its work so far. We have been successful in the prevention of communicable diseases, especially in the severely affected Irrawaddy Delta. And in general people are finding their way back towards a normal life again, reports Roland Hansen, Head of the Asia Desk at Malteser International. Nevertheless, the provision of safe drinking water is still problematic, Hansen continues. This is the reason why an uncontaminated water supply especially in very remote areas remains one of our main focus points.

Another is the rehabilitation of the social infrastructure. In and around the badly destroyed coastal city of Labutta, and on Middle Island, Malteser International is rebuilding health centres and schools as well as latrines in order to avoid the spread of diseases. The organisation is also rehabilitating ponds and wells and constructing rain water collection tanks. In addition, specially trained voluntary counsellors offer psychosocial care to the survivors, helping them to cope with their grief for lost relatives and friends. In the coming weeks and months, Malteser International will help the people living in the disaster region to prepare for future catastrophes better by developing emergency plans and building cyclone-proof evacuation centres with water supplies and latrines.

Malteser International has already provided medical supplies and safe drinking water as well as relief items such as soap, blankets, cooking equipment and mosquito nets to more than 100,000 people.

And their work is ongoing.