The Magistral Post Office issue a stamp for The Philippines 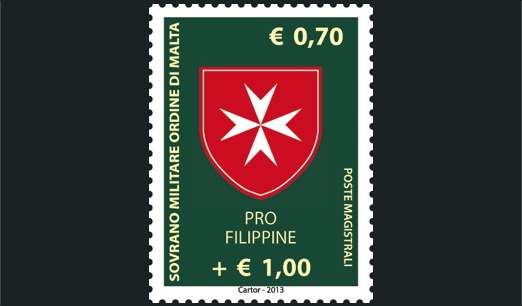 A month since the devastating typhoon Haiyan hit the Pacific archipelago

A little more than a month ago the devastating typhoon Haiyan wreaked havoc on the Philippines during the night of Thursday 7 November, leaving destruction and desolation in its wake. On Monday, 16 December 2013, the Sovereign Order of Malta’s Magistral Post Office issued a special € 1.70 stamp in support of the people in the Pacific archipelago. One euro from each stamp (with a total issue of 10,000 ) will go to finance the Order of Malta’s humanitarian activities in the affected areas in the country.

The Order of Malta intervened in the area through the Philippines Association and Malteser International – the worldwide relief agency – hours after the typhoon struck. The devastation is still evident today, as are the needs of the local population since it is estimated that some 3.9. million are homeless.

The Order of Malta works mainly in the areas not reached by humanitarian aid immediately after the typhoon, and in particular around the town of Tacloban and on the island of Leyte. Relief operations also involved the islands of Bohol and Samar.