The Order of Malta’s pilgrimage to Assisi 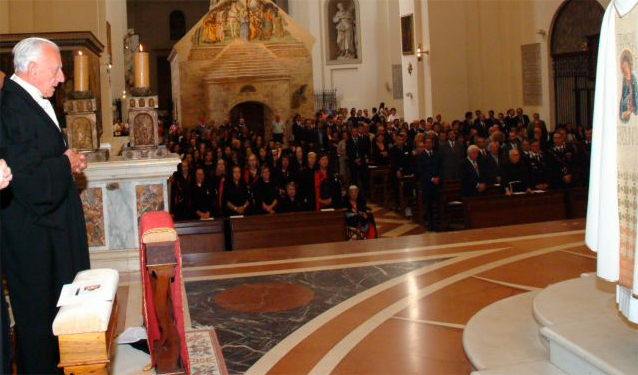 Led by Grand Master Fra’ Andrew Bertie, on 8 September the Order once more made its traditional pilgrimage to Assisi. In the Patriarchal Basilica of Santa Maria degli Angeli, Holy Mass was celebrated by Cardinal Pio Laghi and Msgr. Angelo Acerbi and attended by many of the Order of Malta’s delegations. Members of the Sovereign Council were flanked by the three Italian Grand Priors, Fra’ Filippo Ferretti di Castelferretto, Fra’ Roggero Caccia Dominioni and Fra’ Antonio Nesci, the President of the Italian Association, Fausto Solaro del Borgo, as well as some of the Order’s ambassadors, including the Italian Ambassador to the Order of Malta, Giuseppe Balboni Acqua.

At the end of the ceremony, the Grand Master and members of the Order rendered homage to the Icon of the Blessed Virgin of Mount Philermos, protector of the Order of Malta, kept in the Basilica.

In the afternoon a conference took place in the Grand Master’s Residence in Magione Castle entitled The Order’s Places in the Holy Land organized by Prof. Paolo Caucci von Saucken, President of the Centro Studi Melitensi.