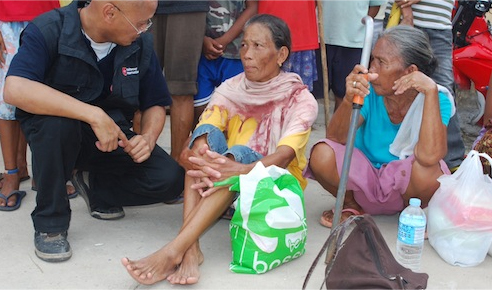 While most of the media and aid organisations are focusing on the area in and around Tacloban City on Leyte Island in Typhoon Haiyan’s aftermath, the Order of Malta’s worldwide relief agency Malteser International will provide relief in areas also urgently in need of aid, but that have thus far received little to no support. The assessment team reported from Bantayan Island, north of Cebu and on the direct path of the typhoon, where it made its third landfall last Friday.

“The residents told me the typhoon is the strongest that they have experienced. More than 90 percent of the houses in the area are destroyed – around 30,000 families need shelter,” reports Dr. Mel Capistrano, Malteser International’s disaster risk reduction advisor and leader of the assessment team.

Malteser International’s relief efforts will also focus on the islands of Samar and Bohol. Samar, one of the strongest-hit islands, can be reached from the north by ferry, but current waiting times are up to 36 hours. In addition to the 1,000 hygiene and food kits which will be distributed there in the coming days, Malteser International is currently purchasing additional relief goods, including water, rice, beans, kitchen utensils, blankets, sleeping bags and buckets. The Philippine Association of the Order of Malta has also sent out a mobile medical team with doctors and nurses to the towns of Basey, Marabut and San Sebastian on Samar. In Bohol, where the population was still recovering from an earthquake on October 15th, Malteser International plans to distribute vouchers for construction materials to displaced families.